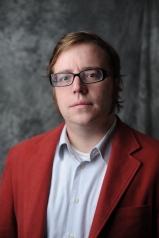 Nicholas Gilewicz, doctoral student at University of Pennsylvania’s prestigious Annenberg School for Communication, will charrette his research on journalism products as lieux de mémoires. Pierre-Carl Lanlgais will provide a response.

Journalism in the United States often and overtly engages with collective memory: commemorating the deaths of celebrities and political leaders, for example, or constructing special story packages to celebrate everything from the centennial of a city to the sesquicentennial of the U.S. Civil War to, most recently, the assassination of former U.S. president John F. Kennedy. However, journalism constructs memories not only about exceptional events, but also about everyday life; the intertextuality of memory situates journalism not only within culture, but also as a form of memory itself. And yet, rarely are journalism institutions or products considered on the whole to be, to borrow Pierre Nora’s term, lieux de mémoire.

This talk proposes reconceiving journalism products as lieux de mémoire. Further, it proposes to reconceive journalism culture as what has been varyingly called a community of memory, a mnemonic community, or a culture of memory. Mnemonic communities generate rules of remembrance, and by adhering to such rules, journalism-as-memory conveys cultural ideology—first and foremost its own.

An examination of the final editions of U.S. daily newspapers that have failed strongly supports this position. A close reading of these final editions reveals that journalists turn to collective memory to articulate the meaning of their work. Specifically, they deploy retrospective memory techniques to craft the present meanings of their newspaper closings—looking back to their past work and its social significance to validate current journalistic practices. They also deploy prospective memory techniques to establish how and why their work should be remembered in the future—their dogged reporting has brought readers the world, and improved the communities in which those readers live.

Analysis of these two uses of memory—using the past for present ends and projecting a future memory from a present text—reveals that journalists construct the idea of the newspaper as a crucible of meaning-making between themselves and readers. The crisis common to failed newspapers, from the 1970s to the present, is the destruction of that crucible, and a concomitant fear: that the ongoing dematerialization of news will also cause the memory of newspaper journalism to disappear.

The newspaper as material product has been winding a long, slow road to unviability. Studying the memories that failed newspapers construct about themselves ultimately may be a way to trace, for the past century at least, the evolution of how newspaper journalists articulate and remember the social meaning of their profession, of how they want to remind us to remember that meaning in the future, and of how they themselves want to be remembered.